Bark Busters, is the largest, most trusted, in-home dog training company in the world.

Today, Bark Busters is a successful, international company with a proprietary holistic and humane dog training system which is operating in Australia, New Zealand, the USA, the United Kingdom, Canada, and Japan. Currently with over 270 franchisees worldwide, Bark Busters therapists have trained more than 1 million dogs.

Sylvia was born in Newcastle-upon-Tyne in the UK and immigrated to Australia with her parents at the age of 5.

Danny was born in Australia but was brought up near Newcastle-upon-Tyne and left for Australia when he was 26.

It was years later when Sylvia was managing an RSPCA branch that she first met Danny. They realised there must be a way to stop dogs being returned to the shelter because of their behaviour, and that’s how Bark Busters came into being.

“We realised while working at the RSPCA that many dogs were being surrendered in their prime by their owners who could not control their bad behaviour. At the time there was no help for these people whose problems fell through the cracks.” said Sylvia.

“We noticed that many dog trainers are reluctant to deal with dogs deemed dangerous or difficult to train. Many prefer to recommend euthanasia without even meeting these dogs face to face.” 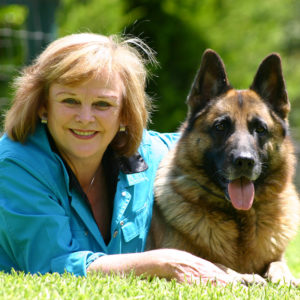 Sylvia and Danny’s vision was to save as many dogs as possible from being surrendered to shelters or euthanised because of behaviour problems which were seemingly impossible to solve.

The Wilsons began working on a ‘delinquent dog program’ together, which encouraged dog owners to keep unruly dogs by offering a free home service to assist them gain control of their wayward wags.

They quickly realised that if they seriously wanted to save disobedient and aggressive dogs from certain death, they needed to perfect a dog-training system that worked in hours rather than days. So Danny and Sylvia began studying the way in which dogs communicated with each other.

Once they had conquered the ‘language of dogs’, they developed the communication, training and behaviour modification methods. With the right approach developed and successfully tested, and after appearing on “A Current Affair” a television program broadcast across Australia on the National Nine network in prime time, Bark Busters was founded in Wollongong, Australia in 1989 and is now sweeping the world.

Bark Busters aims to dispel the myth that dogs should be treated like humans, and actively teaches dog owners to communicate with their dogs in a language they understand.

“Dogs have a pack mentality, the most dominant dog leads the pack and the subsequent pecking order depends on the relative dominance of each remaining member of the group,” explains Sylvia. “Disobedient dogs are often the result of dogs perceiving them selves to be higher in the pecking order than their owners. It also stems from owners not fully understanding canine facts.”

Bark Busters communicates its message to dog owners by explaining its system both in a human and canine way.

“We then teach them how to be the leader and take control of their dogs without using forceful or harsh methods.”

A three-hour, one-on-one training session in the owner’s home ensured that both owner and dog learn interaction and communication skills in the most comfortable environment available.

“Once the dog owner possesses the necessary skills to communicate with their pack-mentality dog, a better relationship can be fostered between owner and dog, and the dog’s behaviour almost automatically improves.”

“We wrote books and produced videos thinking that we would help those dog owners we could not reach. However when people bought our books or videos they still needed assistance” said Danny.

“Franchising was not our immediate thought, as we felt we were the only solution and preferred to be a ‘two man show’ he continued. 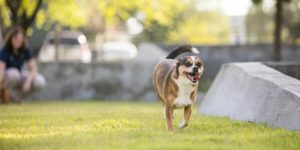 “Despite how hard we worked we realized that we could not reach all of the people and dogs that needed our help, so we decided that franchising was the best solution for us.”

“It was a way of providing the owners who needed our help with the best possible service. The people who we got involved with would own their own business and could be guided by us. It was also a way of protecting the system.” said Danny.

“We decided to investigate franchising, but before we were ready a lady approached us asking if she could join us and be our first franchisee. She had seen a story about us in the newspaper where we had mentioned that we were considering franchising” said Sylvia.

“We told her she would have to wait until we had completed the legal process. She pestered us until we got the company ready to franchise then she bought the first franchise. Sometimes there are people out there who push you to take the next step, and sometimes it’s the right step”

“In our case it was what made us get to the franchising line faster” she said with a smile.

Our first franchise was a ‘walk up start’ and we had no problem finding people after that. Your first can be easy to find if you believe in your business as others will. We have assisted other businesses to franchise and they have had no problem finding their first franchise once we showed them how to believe in themselves. In the beginning we had to learn to be there for them and after years of only the two of us that was a learning curve and took some adjustment. We had to learn how to deal with people and to be patient and understanding of their needs.

They were now able to multiply the effect as more franchises were established. More and more dogs were being saved and more and more families were enjoying their relationship with their dogs.

Sylvia and Danny the heads of the Bark Busters Franchise began to develop their mission of building a global network of dog behavioural therapists to enhance responsible dog ownership and reduce the possibility of maltreatment, abandonment, and euthanasia of companion dogs.

They took on board a business partner. This proved to be an error of judgement on Sylvia and Danny’s part as the partner tried to take over and run the show.

“We severed our relationship very early on. We realised that we had undervalued our own natural talents at the time, thinking that we had to have someone with business experience to assist us” said Sylvia.

“We discovered that we are natural entrepreneurs with good solid marketing and business sense. With the growth of the company and the fact that we have grown it into the largest dog training company in the world with just two directors (Danny and myself) making the business decisions, we are so grateful that we took that direction. We will never again give anyone control over our company” she said.

The highest franchise achievers were offered great deals to assist Bark Busters in taking the company overseas and they have all been very successful. If there were any problems it was just learning how to best do business in each respective country as they all varied.

“Lucky for us all dogs speak ‘dog’, and that has made our problems small ones” said Sylvia.

Sylvia and Danny quickly realized that they needed to must speak with Austrade (a trade development and assistance body set up by the Australian government) in each country, as they can make your job easier. They have all the local knowledge and can point you in the right direction.

Bark Busters do specialise in Barking?

Barking is one of the most difficult problems to solve in dogs. It’s one of the world’s most prolific dog problems. People mistakenly command a dog rather than correct its behaviour. There are heavy fines for the owners of barking dogs in some countries and often there are many disagreements between neighbours because of nuisance barking. But Bark Busters will only solve that nuisance side of barking still allowing dogs to express themselves during play. Other Services conducted by Bark Busters include Puppy School Classes and Group Lessons in basic obedience for adolescent and older dogs. Danny and Sylvia were so sure of the methods that they developed and were teaching to new franchisees that Bark Busters is the only international dog training company that offers a lifetime guarantee. They ensure that therapists will provide future sessions free of charge if problem behaviours recur, or if any new problems develop. The franchise has evolved into an innovative company leading the pet industry worldwide in the dog therapy and training field. A business cannot reach number one without being flexible and innovative. Realising this Danny and Sylvia have developed a program where the Bark Busters team are always learning and growing and constantly thinking of new and innovative ideas.

Among other skills all of Bark Busters people are trained in how to avoid attack from dogs and how to avoid serious injury during an attack. They are also taught how to defuse an attack on another human being.

It was also identified by the Wilsons that as well as dog psychology, the Bark Busters therapists need to learn a certain degree of human psychology.

As they developed Bark Busters the founders won numerous awards.

“Over the years as Bark Busters clients grew into the hundreds of thousands and our reputation became widespread and recognized through our awards achievements, we have worked with many famous people to help them solve their dog’s behavioural problems.” said Danny. “Among them are Bob Hawke (former Australian Prime Minister), Lachlan Murdoch (son of Rupert Murdoch), Ted Turner (owner of CNN), Scarlett Johansson (actress), Kylie Minogue (singer), Jane Turner (Kath and Kim) and Allan Border (former Australian cricket captain) among many others”.

Danny went on to say,

“The story of Allan Border’s dogs is typical of the variety of problems that we are able to solve. They would run through their gate and chase horses that were ridden past their property. In an effort to stop this Allan purchased an invisible border electric fence, where collars that delivered an electric shock were fitted to the dogs. The dogs would still chase the horses but would sit outside the gate, not willing to re-enter the property. Adrenaline played a big role here. The devices didn’t solve the problem just created a new one. Finally, Allan called Bark Busters and the problem was solved. The horse riders were happy, the horses were happy, Allan was happy and so were the dogs.”

In 2007 the projected revenue is $46 million a huge increase over the previous financial year. From humble beginnings Bark Busters is now The Leader of the Pack.