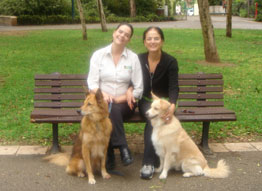 The story about a Lady, Her Dog and a Red Car.

Sharon met Liora after she called Bark Busters asking if there is a way to teach her dog Luka how to stay at home relaxed while she was away at work. Luka hated being left alone and would break out of the house and even out of the garden each time Liora was gone. In addition, if Luka couldn’t find a way out of the house she would severely damage the house while alone.

The situation reached the point that Liora had to think twice before leaving the house and when no proper solutions were found she paid huge sums of money to fix all the damage that Luka had caused in her absence.

This carried on for some time until one day Liora came up with a solution!

She decided to take Luka with her every time she went out and would leave the dog alone in her red car! Amazingly for some reason Luke didn’t mind waiting in the red car for Liora to return even when it meant staying in the car for hours!

Liora would then keep all the car windows open and would always find Luka in the same spot as she had left her.

However before too long this idea turned into a nightmare: Liora have to leave the house hours before her scheduled meetings because she needed to find a space to park her car in crowded Tel Aviv. This was necessary in order to leave the dog in comfort and safety as she needed a parking spot that had shade and cover. At times, Liora would run around in between meetings to change the parking spot several times as the sun changed its position.

The incident that really influenced Liora to seek Bark Busters help was the day when Luka was in the car as always and someone broke into the car and stole her bag. All this occurred while Luka was sitting in the car. That was too much for Liora to take as she said to Sharon the next day:” What good is the dog if she can’t even protect the car!”

Sharon met Liora and Luka at their home and discovered that Luka was also a prolific barker, barking at anything that passed by and she was also aggressive towards other dogs when going for a walk.

Sharon worked with Liora and left her with instuctions to follow. This was in March 2006.The results were excellent and Luka was behaving much better, the barking had stopped, the walks outside were much easier and Liora even managed to leave her alone for a couple of hours at a time.

Over the passing weeks and months Sharon saw Liora a few more times and here and there, there were still some signs of regression such as the day that Luka while home alone was trying desperately to get out of the house.As she tried to exit through the bathroom window accidently turned on the sink faucet flooding the apartment….

Sharon and Liora progressed forward together (in a slow two steps forwards one step backwards…)).

Each time Liora needed Sharon’s help Sharon would only need to remind her to go back to the basics and to practice the leadership exercises.

Liora can now leave her alone and is estatic that when she has group-dinners at her home, as a part of her “Healthy cooking” series Luka is just sitting under the table being a great, quiet and lovely dog!

HOWEVER, the greatest achievement of all was in November 2007 Liora again called Sharon saying she wanted to adopt another dog to come and live with her and Luka!!!

The dog she wanted was a small badly treated dog that Liora had come across. She was told that he was left alone for hours, sometimes not being taken out enough times leaving him to toilet where he was. He was not well socialized with other dogs and was aggressive and it appeared that the owners were being too physical with him!

This dog would have been a difficult challenge for anyone! But Liora felt so confident in herself as a pack leader and in the Bark Busters system that she decided tshe was going to take this dog and change his life!

And she did!!!! with Sharon’s help. Sharon was there to assist Liora at the beginning but now, Denis (a 4 year old Terrier mix) lives happily with Liora and Luka (who before training hated all other dogs), they are enjoying their walks and Liora even takes them to the beach where they enjoy a romp together!!!

Liora’s children say that she has managed to clear the sad look from Denis’s eyes!

This is truly a success story, and a turnaround for Liora, for Luka and for Denis. This is why Sharon loves her job as a Bark Buster therapist, because she can make a difference in people lives!!! Sharon truly desrves the title of ‘Leader of the Pack’