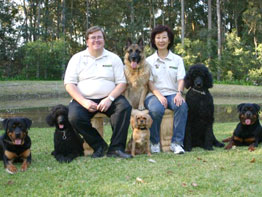 Liz Nishimura and Yves Legare are definitely worthy of the ‘Leader of the Pack Award’ after only been with Bark Busters Canada for three years they willingly accepted the challenge to take Bark Busters to France and immediately began taking steps to make that happen. They sold their Calgary franchises, and began making arrangements to sell their cars and even their home. They are true pioneers and definitely two people worthy of being called “Leader of the Pack.”

Ninety nine per cent of the lessons Liz and Yves do are with dogs that live indoors. Starting with simple indoor problems like jumping up and door bell behavior, they assist owners to gain immediate leadership over their dog. When problem behaviours extend to the outdoors, the Bark Busters technique relies on the indoor work to give the therapists a head start. Here’s the story of a dog that had never seen the inside of a house and how a Bark Busters therapist achieved amazing results.

The dog that came in from the Wild.

One of Liz Nishimura’s memorable lessons was with a 1½ year old Akbash (the Turkish relative of the Great Pyrenees) named Clyde. Clyde was born in the pasture far away from human influence, with most of the time only the flock for company. He was several days old before he first set eyes on people.

Heather, her husband and 2 children lived on a country property with a mature female Pyrenees who had a habit of wandering away even though the owners had fitted an invisible fence. She was impervious to the shock collar that was supposed to stop her. Sometimes she would disappear for days. Heather decided to get a puppy thinking the female would stay home and take care of it. Instead she taught Clyde, at 6 months of age, to run off with her, the shock collar being useless with him as well.

12 months later Heather decided to ring Bark Busters to see if they could help. Liz got the call and attended the lesson. Liz was told that the female Pyrenese was no longer in their care. The younger dog was now all alone and the problem was, that although Clyde knew his name and would appear at the edge of the forest each time he was called, his owners could never get him to come to them, the call of the wild was obviously stronger as he had never been properly bonded to humans.

If his food was set out in the open garage he would come home in the evening to eat, but if the neighbour’s dog was running loose before he ate dinner, then he was gone until the next day. At night, the two dogs would often bark in the woods waking up all of the neighbours. The vet had even suggested putting Clyde’s food bowl on their porch to see if they could entice him home but instead he went for 4 days without eating.

Liz had never experienced anything quite like this and was unsure If she could help Heather. Heather’s husband was pretty sure that Liz wouldn’t be able to achieve anything so he left to work in the garage. Liz explained to Heather how dogs think and communicate and showed her how they were going to talk to Clyde in a language he could understand. She also told her if she didn’t get any results she wouldn’t charge them. Then together they went outside.

It took 5 minutes of calling to get Clyde to even appear at the edge of the woods but he suspiciously remained about 50 feet away. Liz stood well-back from Heather so as not to frighten him. She then instructed Heather to crouch down and call him in a soft, high-pitched voice. Clyde’s body language changed almost immediately and slowly he hesitantly approached now stopping about 15 feet away. Heather kept calling but then he started to move in an arc around her to the right but still maintaining his distance. Liz instructed Heather how to use the “Bark Busters training pillow” landing it close to him and instructed her to use the Bark Busters magic word as it landed.

Clyde immediately switched direction and started to run to the left. Another well-placed training pillow from Heather and Clyde immediately stopped in his tracks. Liz asked Heather if she would be willing to lower her body even more and this time suggested that she try lying on the ground flat out. She quickly did as Liz instructed and continued to call Clyde. To Liz’s amazement, Clyde slowly walked right up to Heather and allowed her to stroke his furry neck. Liz could see that he was poised ready to retreat at a moment’s notice so she instructed Heather to stop patting him. As instructed Heather withdrew her hands and the dog immediately sat down quietly beside her. Heather was absolutely thrilled! This was the first time that Clyde had ever come this close to her.

It was a slow process to get Heather to an upright position, but soft Bahs each time he looked like he was about to retreat followed by lots of praise when he stayed close, worked to keep Clyde with Heather as they both ascended a stairway from the lower terrace to the driveway. Heather was ecstatic but the look on Heather’s husband’s face was priceless.

Footnote: Its amazing stories like this and the intuition of Liz and Yves when training that sees them awarded the “A Leader of the Pack Award for 2007.