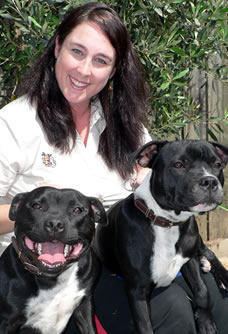 Kelly McClelland only joined the Bark Busters Australia team in February 2007, but in a very short time, she has set a new standard of excellence in saving dog’s lives, customer service, marketing and relationship building.

Kelly has the smallest territory in Sydney which is a part time area and is basically half of the area that other Franchisees work.
Kelly has achieved so much in such a short time which includes gaining 3 new Councils who now recommend Bark Busters services and she works closely with the Staffi Rescue to help them save the lives of many dogs. Kelly recently started Antenatal classes to educate new mums with their beloved pets who want to introduce their new babies to their dogs in a safe manner. Even with all of this going on, she has still eclipsed more experienced trainers with her outstanding sales results on both lessons and equipment, all the time while pregnant with her 2nd child.
The story below is typical of Kelly and highlights her desire to help dogs and reflects her passion for Bark Busters.

When Kelly first met “Ziggy “ he was out of control, barked constantly, was abused by his owners, and was attacked by the neighbours (they were so frustrated that they were throwing rocks).

When the client advised Kelly that they had had enough and were going to take him to the RSPCA to have him put down, she immediately contacted Pauline from The German Shepherd Rescue, who not only helped to get him out of the RSPCA shelter, but also assisted in placing “Ziggy” into a loving home in South Australia.

“Ziggy” arrived at his new home in Renmark, S.A. on the following Saturday after a 3 day trip down there. The family absolutely loved him. He has such a gentle playful nature and gets on great with the kids. He loves them, loves their Belgium Shepherd and they both have the run of the backyard.

Katherine, his new mum, and her husband absolutely adore Ziggy who say loves a game of tug-of-war and loves playing with the kids, so all is well in Ziggy’s new world . Ziggy has a large yard in an orchard to run around with his Shepherd friend.

Ziggy now has the quality of life that he deserves.

Kelly has not only helped many needy dogs such as “Ziggy” but, she also takes time out to help her fellow Franchise owners. Her unselfish attitude is a great asset to her and the Bark Busters family.

We believe Kelly to be very deserving of the award “Leader of the pack” because she demonstrates these special qualities every single day.