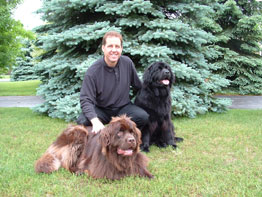 Graham Smith has just recently joined the Canadian Bark Busters team, but, in only a short time, he has set a new standard of excellence in customer service. The story below typifies Graham’s commitment to his clients and his passion for Bark Busters.

A woman named Lynne Dionne had an Australian cattle dog with significant behaviour problems. Most problematic was it’s aggressiveness to strangers. Lynne was in her 60’s and lived alone. She decided this dog was too much for her to handle so she found the dog a more suitable home. The new owners also found the dog’s behaviour unmanageable and, after trying for a while, they told Lynne they could not keep the dog and were going to put it down. Lynne took the dog in once again, sparing its life. However, the original behaviour problems persisted, and, after three months of living with the problem, Lynne decided she needed to do something.

Lynne researched 6 trainers. She was sceptical because what she had tried in the past had not worked. Graham Smith, one of our franchisees in Montreal, was one of the trainers she spoke with. She did not book a lesson on the initial call, preferring to research some more. After a couple of days Graham followed up with her. She still had not decided. Graham is tenacious. He knew he could help. He offered to come over and meet her and the dog in person. Lynne agreed.

After reviewing the situation, Graham realised it would be a tough, but fixable case. He began working with Lynne immediately, achieving the amazing results typical of most Bark Busters sessions.

As he was leaving at the end of the lesson, Graham noticed that Lynne had a physiotherapy table set up in peaceful room at the front of her house. Graham asked Lynne what it was for. Lynne explained that she was a physiotherapist. She used to own a practice, but had sold it and was now retired. However, she kept busy by using her skills to operate a home based practice, working exclusively with women being treated for breast and other types of cancers. These women had special needs that couldn’t be met as well in a typical practice. Lynne had a passion for helping these women. Unfortunately, she has had to put her practice on hold since taking in the dog. His aggressive behaviour and loud barking prevented her from safely giving the care and tranquil environment her patients needed.
Graham said to Lynne: “So let me get this straight: I get to save a dogs life and re-open a clinic that helps women with cancer. How great is my life?!!”

Graham did not charge Lynne anything for the lesson. Like we have all learned at bark Busters, often the non-monetary rewards of this career are worth a lot more. Lynne wrote him a letter last week saying the clinic was back open and the dog was doing great. She couldn’t have been happier.

We admire Graham’s persistence. He will not take no for an answer. He knows Bark Busters is the best option for dog owners, and he will do whatever it takes to help them see that. Once they are clients, Graham’s follow up service to them is unbeatable. He drops in on each client a couple of times within 10 days of the lesson to make sure that they understood everything about the training and things are going according to plan. As a result he has built a very successful Bark Busters business based completely on referrals. Graham has set a new record for a successful start up. He’s only been operating for 20 weeks and he has already helped over 130 dogs. He is an incredibly well deserving recipient of the Leader of the Pack title and we are proud to award him that award.